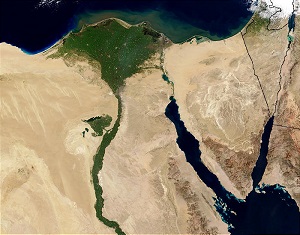 In 1979, Egyptian president Anwar Sadat said if the country ever again went to war, it would be over water. Egypt’s near-total reliance on the Nile River for water has made for tense relations with other Nile Basin countries at times, and Ethiopia’s current construction of the massive Grand Ethiopian Renaissance Dam on the Blue Nile tributary, upriver from Egypt, has led to speculation that war could erupt. Some experts say it probably won’t, because Ethiopia has a strong military and Egypt is no longer under the hawkish sway of Hosni Mubarak, but sabres have been rattled.

Bloomberg reports on Ethiopia’s rejection of Egypt’s latest proposal asserting its right to most of the water.

Aljazeera provides background on this dispute, as well as previous clashes over the Nile.