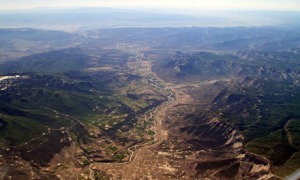 A new report by the nonprofit group Ceres, which advises on green investment, indicates that 55% of hydraulic fracturing in the United States since 2011 has taken place in drought-stricken areas, such as California, Colorado and Texas.

The report’s findings are significant because fracking uses a lot of water. Each well can require up to 10 million gallons of water in the drilling process, which pumps chemicals and water into shale deposits thousands of feet underground to break up the rock and release natural gas or oil. According to the report, 97 billion gallons of water went into the ground at 39,300 sites between January 2011 and May 2013.

The oil and gas industry points out that its use of water is comparatively small. In many states, fracking draws well under 1% of all water used, according to sources. The industry also says it will increase the amount of recycled water used (from none or next to none in most places to … some, presumably). Finally, there is some evidence from a University of Texas study that fracking reduces water use overall because it decreases reliance on water-intensive coal production, as it pushes utilities to use more natural gas power.

Fracking for natural gas may help us save water – Time

U.S. Shale Map: Could Be a Lot of Fracking Drilling in the Lower 48