To the Rescue in California? Solar-Powered Desalination 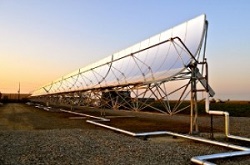 When you hear about desalination, it’s usually about a large-scale effort to transform seawater to freshwater through the process of reverse osmosis. In other words, an industrial plant is built in a terribly dry place at considerable expense, and salt water is pumped in and forced through membranes to create much-less-salty water (to oversimplify). But there is another, completely different process that separates salt and other things from water using a “solar still.”

Solar desalination technology isn’t new, but a company called WaterFX* is trying to put it to a new use in water-challenged California, and, potentially, everywhere, according to an interesting article in Forbes (link below). The company’s effort is about selling its scalable Aqua 4 system to growers and water districts, who can use it to recapture, purify and reuse agricultural run-off (that is, the copious amount of water used for irrigation that picks up salts, fertilizer and other impurities that make it problematic to reuse without damaging crop yields). The company’s small-scale pilot project with California’s  Panoche Water District was able to produce nearly 500 gallons of clean water per hour, and the district plans to launch a larger project with the company, according to the article below.

Read more about how the sytem works in Peter Kelly-Detwiler’s* piece for Forbes.

(*Note: Peter Kelly-Detwiler is a partner at NorthBridge Energy Partners, LLC. This post is not an endorsement of that organization or of WaterFX.)