At the Point of ‘Peak Water,’ Our Foreseeable Future Grows Shorter 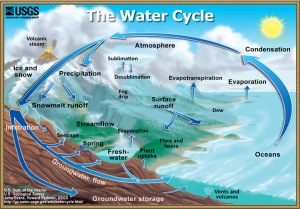 The world has a finite supply of accessible freshwater. By some estimates, less than 1% of the naturally occurring freshwater on earth is accessible to humans; the rest is locked up in ice or too deep and dispersed in the ground for us to get. The phrase “peak water” refers to the point at which we’re consuming available freshwater faster than it can be replenished by nature through the hydrologic water cycle to the usual sources, such as lakes, rivers, and shallow underground aquifers, many of which are already dangerously depleted.

Whether we’re nearing the point of peak water, already there, or well past it is a question under ongoing discussion. One point of confusion is that water volume and use vary widely by region. Some areas are nearing or past peak water, others aren’t. Another factor is that climate change is throwing the status quo of water abundance or scarcity by region into flux. Look at the 2013 research showing that heavy pollution from the U.S. and Europe from the 1960s into the 1980s effectively changed weather patterns, becoming a primary cause of Africa’s long, widespread, and deadly Sahel Drought. What will happen because of today’s pollution from the world’s most prolific sources? (e.g., China).

And those who don’t see water and climate change as parts of the same series of problems should note: “The hydrologic cycle is the climate cycle,” says hydro-climatologist Dr. Peter Gleick, co-founder of the Pacific Institute, in a video interview that lays out overlapping problems. Water, climate change, and energy production are all inextricably linked. In fact, links between water and energy make up the theme of this year’s World Water Day, coming up on March 22.

It’s worth noting that water scarcity is a crucial element of the resource crises cited in the upcoming NASA-funded study predicting a “perfect storm” within a few decades that could end global civilization. The study looked closely at the fall of previous complex societies, such as the Mayans and Romans, and found parallels with our unsustainable overuse of resources — particularly the massively unequal use by wealthy versus poor.

However close to “peak” we may be, no sustained sense of urgency over water scarcity is apparent in mainstream media. In part this is because water supplies are local or regional, not global, and in part it’s because these problems take a long time — and a much longer attention span than a 24-hour news cycle has — to address. So you see localized articles about regional droughts and potential conflicts over resources, though rarely anything that puts the worldwide water crisis in perspective and looks ahead to cross-cutting solutions (e.g., large-scale renewable-energy power production that requires much less water than nuclear or fossil-fuel-based power, combined with modern and far-reaching conservation measures addressing agricultural, industrial, and residential water use and re-use).

Compared to today’s world, our near-future planet will have double the human population, even more-severe climate change, and yet the same old freshwater, redistributed. Perhaps it’s too easy to push off the worry, as we think we’ll get serious about conservation before it’s too late. Or that governments and industry will join together to provide desalinated water wherever necessary — somehow without the troubling environmental costs of today’s practices — before vast human populations must migrate or die.  Or that those fresh and brackish aquifers recently discovered under the oceans will push the point-of-no-return a few decades further into the future. Well, someday, after the fights over the rights, maybe somebody will throw billions at drilling into those aquifers. Because someday they’ll have no choice. And then those reserves will be sucked dry, too.

You might say we have no choice other than to better manage our freshwater.

Are we on the path to peak water? – Climate Central (with infographic)

Over-Salted: The Trouble(s) With Desalination