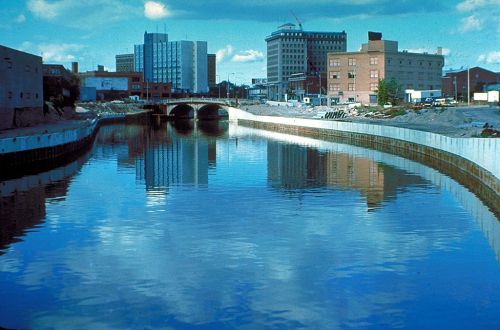 Flint River in the 1970s. Image courtesy of the U.S. Army Corps of Engineers.

I worked recently for a United Nations-affiliated international non-governmental organization in Geneva, Switzerland, named WaterLex. It specializes in finding sustainable solutions based on human rights to improve water governance worldwide. Much of its work involves educating parliamentarians and others about the human rights to water and sanitation, established in 2010, and how they can be mixed into practices such as integrated water resources management.

In that context, I was accustomed to hearing about water crises in African and South American countries where municipalities often lacked adequate infrastructure for water provision. So I started to think I knew a thing or two about a government’s obligation to realize the human right to water for its population. Then, while I was still living in Switzerland, came news of Detroit, Mich., shutting off water to customers who hadn’t paid their bills. A similar situation came to light in Baltimore, Md. In those places, a cry rose up for aggressive action to uphold the human right to water, with a focus on the issue of affordability.

In the U.S., a country where infrastructure has been in place to provide freshwater to most homes in most municipalities for more than a century, invocation of the human right to water was a surprising and unsettling thing to hear.

But the water crisis in Flint, Mich., cranks up the volume to a whole new decibel level, and rightly so. The allegations are appalling: Officials knowingly allowed households in a city of 100,000 to drink, cook and bathe in water fouled by lead and other contaminants from lead pipes corroded by polluted Flint River water, following a money-saving switch to that water source from Lake Huron and the Detroit River. Documentary filmmaker and Flint native Michael Moore, among others, is calling for criminal prosecution of Mich. Gov. Rick Snyder. With young children at risk of brain damage and other health problems, it’s not difficult to picture an approaching flood of lawsuits. Fixing Flint’s water is expected to take many years and cost hundreds of millions of dollars.

Worse, too much lead in municipal water is not limited to Flint. News reports point out city after city in several states where aging infrastructure and improper maintenance have been creating similar problems.

Note to cities and towns: Before that water infrastructure gets to be about a century old, you have to increase the amounts of money and effort put into its upkeep or replacement. If not, you’re likely to soon be taking away your people’s human right to water, and that will always end up being a bigger bill to pay in the end. Oh, and … though it used to go without saying … don’t poison everyone.

Amid Flint water crisis, the lawsuits are piling up – CBS/The Associated Press

10 Things They Won’t Tell You About the Flint Water Crisis. But I Will. – MichaelMoore.com