China’s Virtual Water Flows: The Rich Get Richer, the Poor Get Thirstier 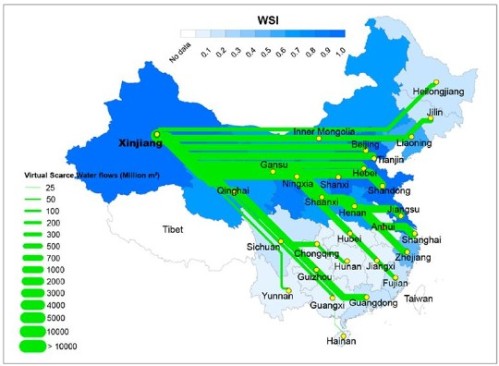 The study, conducted by the International Institute for Applied Systems Analysis (IIASA) with the University of Maryland and published in the journal Environmental Science & Technology, uses the economic concept of “virtual water.” That refers to water tracked through trade of goods that require water to produce, as most do. The researchers say it is the first study to take water scarcity into account rather than treating all water as equal in the analysis.

The researchers say the study helps lay the groundwork for better water-resource management. One upshot is the idea that it might be smarter on the whole not to import water-intensive goods from the dry north to the wet south, even as the country gears up massive efforts to divert water in the other direction because of the shortages.